Kilmorna Manor Guesthouse and Private Nature Reserve occupies 208 hectares in the Schoemanskloof, a deep valley through which the Crocodile River flows down the escarpment from its source on the Highveld plateau to the sub-tropical Lowveld.

Schoemanskloof is thus in a transition zone, with elements of both the Highveld and the Lowveld, and this has resulted in a rich diversity of plants, birds, invertebrates and other life forms.

On the steeper slopes above and around the manor – at an elevation between 1300 and 1500 metres – the habitat is evergreen Afromontane Forest. Annual rainfall is between 1000 and 1250 mm per year and mist is a regular feature, sometimes lingering for days. This mist provides essential moisture for the escarpment forests that are sometimes referred to as ‘mist-belt’ or ‘cloud’ forests.

Afromontane Forest covers just 0.56% of South Africa but contains about 6% of the country’s plant species. It is not only the smallest, but also the most fragmented of the country’s seven major biomes, occurring in pockets and patches along the mountain chains from the Northern Province to the Western Cape. Beyond South Africa’s borders, it occurs through eastern Zimbabwe and Malawi into East Africa where the forests of Kilimanjaro and Mount Kenya contain many of the same species as found at Kilmorna.

South Africa’s Afromontane forests were heavily logged at the turn of the 20th century and the canopy of most forests is uneven because the sub-canopy trees have yet to mature (over a hundred years on).

Since most Afromontane forests are confined to kloofs and gulleys, moisture is obviously a limiting factor but dry-season fires in adjacent grassland also prevents the expansion of the forests. Commercial timber plantations of exotic pine and eucalyptus trees are a threat to Afromontane forests as they suck up the water supply and invade the forest margins.

The forest, of course, does not only consist of trees. There are many species of ferns, mosses, lichen and fungi as well as shade-tolerant bulbs and even grasses. Walking along a quiet forest trail, with its carpet of fallen leaves, mossy logs and colourful toadstools, is one of the most peaceful and soul-restoring nature activities.

Many bird species occur in the Kilmorna Forest but most of these are shy and secretive, and occur at low densities. Fruit and insect-eating birds often move around in mixed-species groups, particularly in the dry winter months when they are not breeding. This explains why it is possible to walk for long periods and see no birds, then suddenly be confronted with a whole mob. Birdwatching in any forest is always a challenge, however, as birds will hear you coming long before you see them, and they hide among shadows on the forest floor or move directly overhead in the leafy canopy. The garden around the manor provides the best birdwatching opportunities as forest-dwelling species come to the fringes. Ten of the ‘specials’ including Narina Trogon and Olive Woodpecker – are featured in our Star Birds chart and a full bird checklist is available. African Crowned Eagle may sometimes be seen soaring above the forest, while Knysna and Purple-crested Turacos (louries) feed on the Wild-plum and other fruits.

Mammals of the forest include African Porcupine, Red Duiker and Large-spotted Genet, with Vervet Monkey and Chacma Baboon on the fringes and in the canopy when wild figs or fruits ripen.

Downhill from the forest, the habitat opens up. First, there is open grassland dotted with Waterberry (Syzygium cordatum), Broad-leaved Beechwood (Faurea rochetiana) and various proteas as well as Dwarf Cycad (Encephalartos humilis) and a host of beautiful small flowering plants in spring and summer. With an abundance of nutritious grasses, this area is favoured by the zebra, impala and other herbivores reintroduced to the reserve. Further down, a mixed-woodland with impressive specimens of Paperbark Thorn (Acacia sieberiana), Kiaat (Pterocarpus angolensis) and  African Wattle (Peltophorum africanum) occurs as well as thickets of Flame Thorn (Acacia ataxacantha), Red Currant (Searsia chirendensis), Pride of De Kaap (Bauhinia galpinii) and Buffalothorn (Ziziphus mucronata).

Birds are more conspicuous in these more open habitats with species different from those of the forest to be seen: Black-collared Barbet, Striped Pipit, Violet-backed Starling and Fiery-necked Nightjar among many others. In summer, migrants such as European Bee-eater, Barn Swallow and Spotted Flycatcher are common. Mammals such as African Civet, Serval, Bushpig, Grey Duiker and White-tailed Mongoose – and perhaps Leopard – occur alongside Waterbuck and other large herbivores. 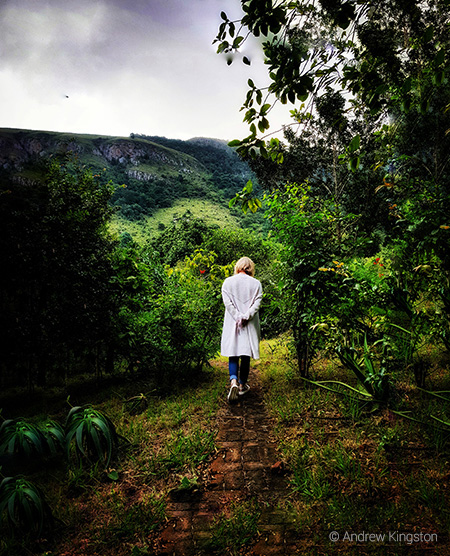